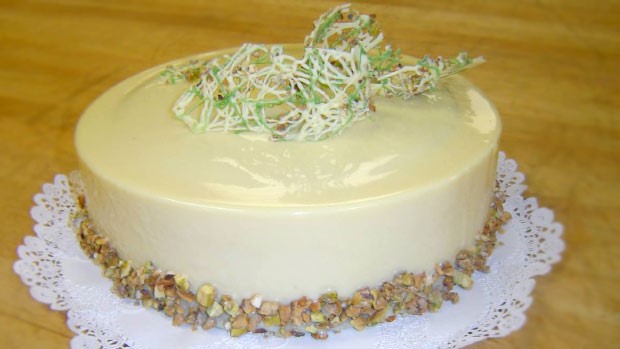 Sift flour and other dry ingredients. Cream butter and sugar in 5 quart mixing bowl. Add the eggs all at once and mix until combined. Add the sifted dry ingredients and mi on first speed until incorporated. Form into a round disk. Wrap in plastic wrap and chill until firm. Using a pastry sheeter roll the dough down to number 4. Dock the dough using the docking tool. Use the 10” cake round to cut out a circle of dough. Transfer dough to a parchment lined Teflon sheet pan. Bake at 375°F / 190°C for 10-15 minutes. Cool. Refer to “Cake Assembly” for assembly instructions.

Combine all ingredients in the medium mixing bowl. Stir to combine. Reserve for the pistachio biscuit.

Melt the butter in the small saucepan.

Chop the candied orange peel using the Chef’s knife and the cutting board.

Combine the egg yolks, whole eggs, vanilla, and 80 g of sugar in a 5 quart mixing bowl. Mix with the paddle attachment until light and fluffy.

Whisk the egg whites in a 5 quart mixing bowl with the whisk attachment. Add the sugar a little by little after whisking the egg whites first for one minute.

Using the blow torch, heat the bowl of the mixer while whipping the sugar and egg whites to 100°F. Whip to stiff peaks.

Fold the orange peel into the yolk mixture using a rubber spatula.

Transfer the egg whites to the large mixing bowl. Fold the egg yolks into the egg whites. Add the flour and pistachio powder to the mixture.

Temper some of the mixture into the melted butter and then add it to the large bowl. Fill a pastry bag (fitted with the #808 tip) with the batter. Pipe the batter onto the sheet pans prepared earlier. Start in the center of the circles and pipe outward in a spiral motion. Repeat for the 10” circle and both 8” circles.

Bake at 400°F / 205°C on a rack in the oven until the edges turn golden brown and a toothpick inserted in the center comes out clean. After baking, remove from the oven and brush the surface with the Cointreau punch. Allow to cool completely before cake assembly.

Toast the pistachios on a parchment lined sheet pan. Set aside.

Combine the water and sugar in the copper pot and cook to 250°F / 121°C. Add the toasted pistachios and stir. Return the bowl to the stove and caramelize over low heat.

Spread on a baking sheet. Once completely cooled, crush using a heavy weight or a hand hammer. Do not use an electric mixer, as it will break the nuts into powder.

Fill the 10” round cake pan with cold water. Place the gelatin sheets in the cold water to soften them.

Peel the bananas and cut them on the bias into slices. Place in the small mixing bowl. Add the lemon juice to the banana slices to keep them from discoloring.

Add the pre-softened gelatin and stir to combine. Cool to room temperature.

This recipe should not be started until both the short dough and pistachio biscuit have been baked and cooled.

Fill the 10” cake pan with cold water. Place the gelatin sheets in the cold water to soften them.

Cook the sugar and glucose in the copper pot until it is the color of caramel. Stop the cooking by adding the soft butter and the hot vanilla cream. Bring back to a boil for 1-2 minutes. You will cook this mixture until is starts to smoke a little bit.

Pour through a conical sieve and add the pre-softened gelatin leaves.

Do not make the soft toffee until the 8” pistachio biscuits have been baked and cooled.

Cut and scrape the seeds from the vanilla bean.

In a medium mixing bowl, whisk together the egg yolks and sugar.

In the saucepan, bring the milk, cream, and vanilla seeds to a boil. Slowly temper the milk mixture into the egg yolk mixture, stirring constantly. Return the mixture to the saucepan and cook until it reaches 180 degrees Fahrenheit.

Pour through the conical sieve to strain the mixture.

Return to the bowl and cool over an ice bath.

Fill small saucepan with water and warm on stove.

Fill small bowl with water and place near stove with pastry brush.

Combine the water and sugar in the copper pot. Cook to 250 degrees Fahrenheit skimming the surface and brushing down the sides with water as needed. When the sugar/water reach 240 degrees Fahrenheit, begin whipping the egg whites in a 5 quart mixing bowl. Add the sugar gradually and use the blow torch to heat the mixture to 100 degrees Fahrenheit. Whip to stiff peaks.

When the sugar/water reach 250 degrees Fahrenheit, pour the syrup in a thin stream down the side of the 5 quart mixing bowl while whipping on second speed.

Continue to whip on second speed until cooled.

Fill the 10” cake pan with cold water and place the gelatin sheets in the water to soften them.

Whip the cream in the medium mixing bowl.

Heat the Crème Anglaise to 115 degrees Fahrenheit. Remove from the heat and pour into a medium mixing bowl. Add the gelatin and mix it with the pistachio paste. Fold in the Italian meringue. Allow to cool to 90 degrees Fahrenheit.

Do not start this recipe until the pistachio biscuit and soft toffee have been completed and assembled as described in the “Cake Assembly” section.

Fill the 10” cake pan with cold water and place the gelatin sheets in the water to soften them.

Cool to 80 degrees Fahrenheit. Fold in the Italian meringue.

Do not start this recipe until both the 10” and 8” sections of the cake have been assembled per the “Cake Assembly” section.

Place a sheet of parchment paper on a Teflon sheet pan. Image #5 below: Place the 10” round short dough on the 10” cardboard cake round on the sheet pan and fit the 10” round ring around the dough and cardboard.

Pour the caramelized bananas onto the short dough. Level with a spatula if necessary.

Place the 10” pistachio biscuit on top of the caramelized bananas. Freeze until set.

Place a sheet of parchment paper on the Teflon sheet pan. Place an 8” pistachio biscuit on the sheet pan and fit the 8” ring around it.

Image #8 below: Pour the soft toffee onto the pistachio biscuit and level with a spatula if necessary. Freeze until set.

Remove the 10” and 8” cake rings from the freezer. Place the 8” cake ring on an inverted turn table. Use a blow torch to heat the sides of the ring so it will fall off of the cake.

Use a small amount of glucose to attach the lace doilies around the edge of the cardboard cake circle. Set aside.

Remove the frozen cake and place on an inverted turn table. Use the blow torch to heat the sides of the ring so it falls off the cake. Place the cake on a wire rack over a sheet pan. Pour the warm milk chocolate glaze over the cake so you have a smooth finish and no exposed cake. Allow the cake to set to the point where the glaze is still wet yet doesn’t drip off the sides of the cake. Lift the cake off the wire rack and hold with one hand under the cake. Use your other hand to press the crunchy pistachios on the bottom 1” of the cake. (The mascarpone cheese mousse only covers the 8” layers. You will be able to see the 10” layers through the glaze. This is the area you want to cover with the pistachios.) Center the cake on the cardboard cake round with doilies prepared earlier. Refrigerate until the glaze sets.

Decorate the top of the cake with a white chocolate and pistachio lattice or other decoration. 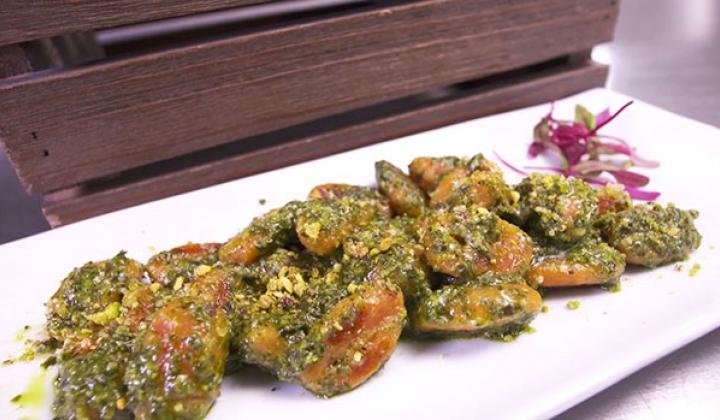 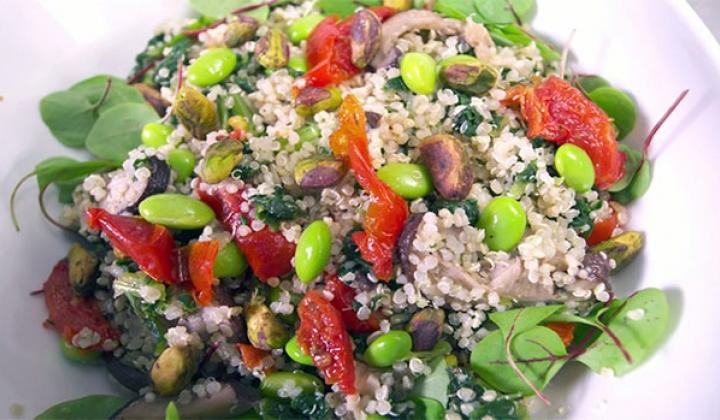 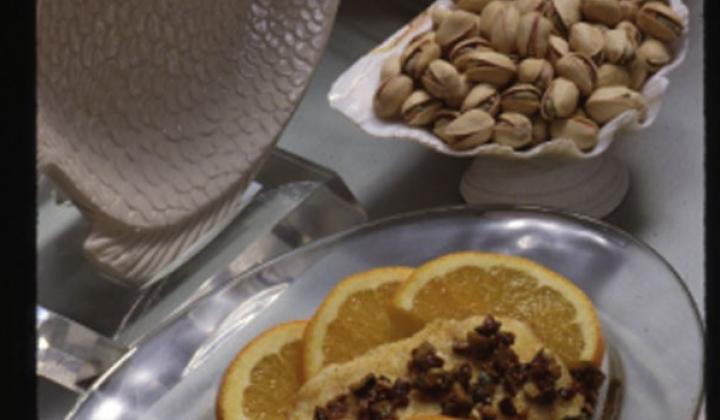